An exceptional photograph that captures foundry employees at work was recently honored with a Best of Show Award at the local American Advertising Awards (ADDYs) ceremony in February. The photo was taken by photographer Michael Leschisin of Image Studios, a commercial photography and video production company in Appleton, Wisconsin. The photo, used to support the iron casting supplier's marketing efforts, captured top honors from the AAF-Fox River Ad Club. 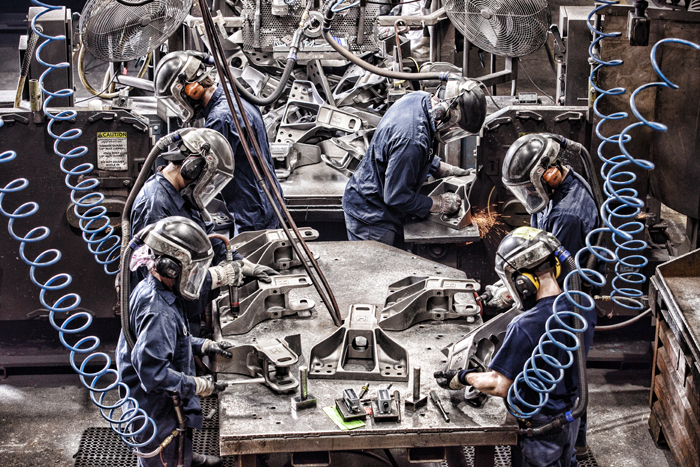 Leschisin is a National Gold Addy award winning photographer, having been recognized in the past for his work in the area of industrial photography.

"I often feel the best work comes from great creative collaboration rather than by trying to capture a preconceived notion," said Leschisin. "It's a joy to work with the marketing team at Waupaca Foundry. Marketing and Communications Manager Sara Timm and the production team always leave room for discovering the moment, as was the case with this shot."

"The production team always leaves room for discovering the moment, as was the case with this shot." — Michael Leschisin

The AAF-Fox River Ad Club is a local American Advertising Federation chapter, composed of agencies, internal marketing departments, studios, and freelancers, in the greater Fox River area, as well as Sheboygan and parts of Milwaukee.

The American Advertising Awards are the advertising industry's largest and most representative competition, attracting over 40,000 entries every year from local clubs.