Waupaca Foundry is proud to employ the men and women who have served our country. In fact, 10 percent of our employees have served in uniform. 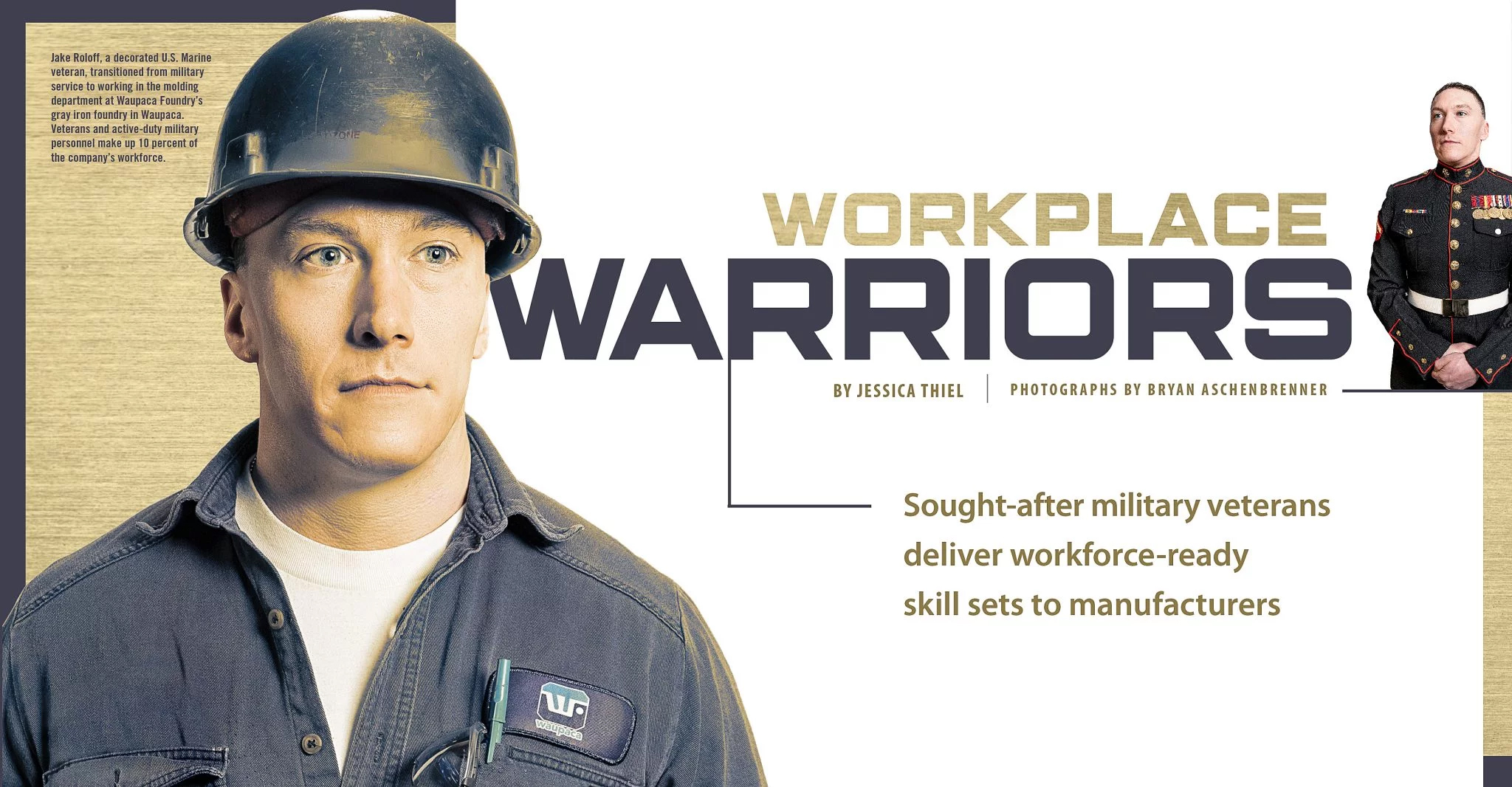 When Yliyah Weber-Hawkins decided to join the Army National Guard in 2011, he was able to cross one big concern off his list: the status of his job while he fulfilled his military obligations.

Since 2005, he had worked for Sargento Foods at its Hilbert facility. As Weber-Hawkins completed his Basic Combat and Advanced Individual Training, the company not only accommodated his needs, it fully supported him in his endeavor.

Weber-Hawkins was deployed to Afghanistan for nine months in 2014, and during that time, he could rest knowing his job was secure when he returned. When employees are on active duty, Sargento makes up the difference between their military pay and what they would be earning at their job. In addition, co-workers stayed in touch with him, sending letters and care packages.

I can't even really put words to it. It's just amazing. To know that I have an employer that backs me is just one less thing that I have to worry about.

"I can't even really put words to it. It's just amazing. To know that I have an employer that backs me is just one less thing that I have to worry about or stress about," says Weber-Hawkins, a maintenance apprentice for the company.

For Weber-Hawkins, a father of two who balances service in the National Guard with completing the apprenticeship program and attending classes at Lakeshore Technical College, that's huge. Because Sargento also pays for his schooling, he's able to transfer his Veterans Administration education benefits to his two daughters instead of using them for himself.

Steve Cahoon, senior director of manufacturing for Sargento, says the company recognizes the important role military service people play in keeping the country safe, so it always ensures personnel are supported when they're away and have a job when they return.

"We're trying to do everything in our power to keep connected with them, so they feel like they're part of the family here at Sargento," he says.

A recognized supporter of military members, Sargento has received three Patriot awards and two Above and Beyond awards from the Department of Defense group Employer Support of the Guard and Reserve, or ESGR. The group works to develop and promote supportive work environments for those in the National Guard and Reserve.

That level of support benefits service members and veterans and the company alike. Employees with military experience bring loyalty, discipline, creative thinking and collaboration, all skill sets that are directly applicable to a manufacturing environment, Cahoon says.

The initiative includes having a team of state employees and private-sector representatives visit Hiring our Heroes transition summits at military bases domestically and abroad to tout the benefits of living in Wisconsin. Already, the delegation has visited with bases in three states and interacted with more than 850 service members.

With 200,000 to 250,000 transitioning veterans in the U.S. military, Rebecca Deschane, talent initiatives director for the WEDC, says this is a worthwhile group to pursue, and Wisconsin has much to offer. It leads the nation in state-offered benefits, is an excellent place to raise a family and provides a strong quality of life and education system, she says.

Businesses registering with the initiative provide information about open positions and skill sets the company is seeking. Following transition summits, the Wisconsin delegation provides the company with access to vetted resume for transitioning veterans and spouses who might be a good match for openings.

More than 40 Wisconsin companies have already joined the program, including Oshkosh Corp., Foxconn, Quad Graphics and Schneider. Businesses can get involved in several ways, including joining the delegation, hosting a "sidecar" event in conjunction with a summit and applying for a corporate fellowship coordinated by Hiring our Heroes, a national initiative aimed at connecting veterans, service members and military spouses with employment opportunities.

Deschane says the concerted effort between the state and private-sector businesses makes the initiative stand out. "We're finding that that united front is truly setting Wisconsin apart," she says.

A COMMITMENT TO VETERANS

In addition to partnering with Mission Wisconsin, Oshkosh Corp. works with the Department of Veteran Affairs, Hiring our Heroes and the U.S. Chamber of Commerce to reinforce its commitment to helping veterans transition, says Darcy Pierson, director of diversity and inclusion for the company.

Oshkosh Corp. employs around 850 veterans, making up 7 percent of its workforce, and the company has increased its veteran population by 17 percent in the last year. In 2018, it participated in events with military bases across the nation, and it's finalizing its schedule for 2019.

"It makes a lot of sense to join in a collaborative program that multiple government agencies are working together to help address the talent gaps — the current talent gaps as well as the future workforce needs," Pierson says.

Once those veterans join the company, Oshkosh Corp. works to ensure they successfully transition into their civilian roles. It offers a military member employee resource group, and each segment of the company has a network where members support one another as champions, buddies or mentors as they transition. In addition, the company holds celebrations and recognition events for vets.

Mercury Marine also has a strong history of hiring and supporting veterans. Steve Zurawski, talent acquisition manager for Brunswick Corp. with Mercury Marine, says as the company faces difficulty in filling positions, it has begun an initiative to hire more veterans.

The Fond du Lac-based manufacturer of marine engines has a policy that every veteran who applies gets an interview. To support veterans once they are hired, Mercury has affinity groups in place. This creates a welcoming environment for individuals who have shared similar experiences, Zurawski says.

"You're coming from military life to civilian life, and here's how we can help you transition," he says. â€œItâ€™s nice to have a tight bond and show our veterans that we have groups here to help."

Plexus Corp. of Neenah is another company that actively recruits veterans. Jay Stephany, manager of talent acquisition, says this group is a natural fit for the work Plexus does. The company works to "connect the dots" for associates, so they take pride in the products the company builds and what those go into.

Some Plexus products and technology go toward saving lives and helping keep soldiers safe, a fact that resonates with many veterans working for the company, he says.

"We get a chance to be a part of being able to support the military, whether it's building the technology and/or making sure that military folks, when they come out of service, that we can offer, hopefully, some employment opportunities for them," he says.

The company aims to draw from veterans' experiences while also recognizing their service through celebrations and its military wall, which includes pictures of veterans, those who are serving actively and employees' family members who are serving.

Creating a supportive environment for veterans and active-duty military service members is vital. Luke Vincent balances working as an electrician at Waupaca Foundry's Marinette location with serving in the Army Reserve. 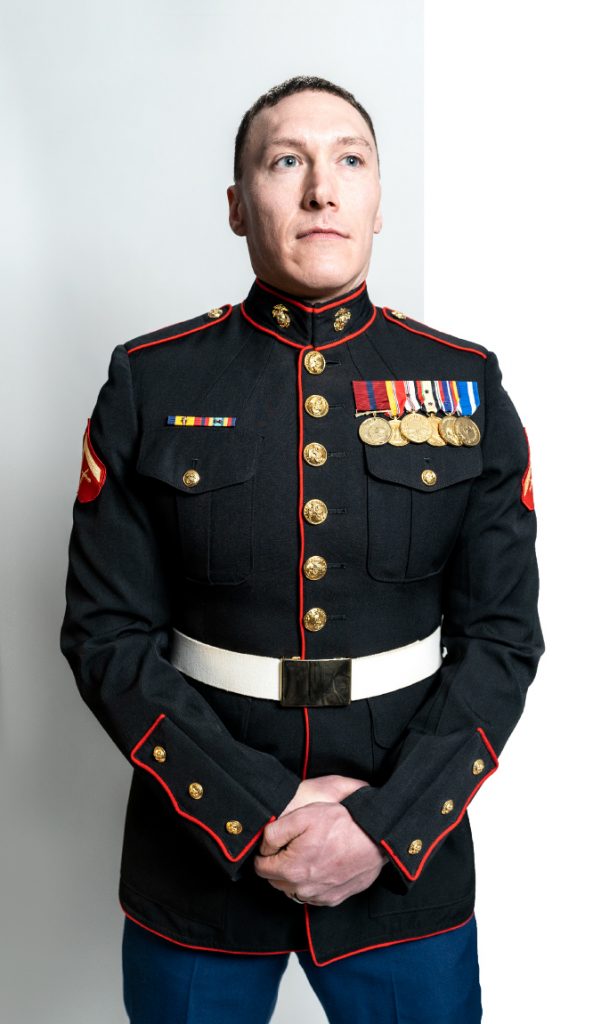 Veterans and military personnel, serving at all levels from general foundry to top management, make up 10 percent of the company's workforce. Vincent says this creates a sense of camaraderie, knowing others he works with every day can relate to his experiences.

In addition, Waupaca Foundry accommodates scheduling needs for those in the Reserve and serving actively and holds positions open for those who are deployed, maintaining their level of seniority.

Vincent says he feels lucky, especially as others within his company have shared issues they've experienced with their employers.

"I tell them, 'Mine are awesome,'" he says. "It definitely helps because I have absolutely no issues."

Rob Johnson, an Air Force veteran and chief financial officer for Waupaca Foundry, says the company's military-friendly practices are a win for all parties. Veterans and military service members can rest knowing they have the backing of their employer, and the company benefits from the many skills veterans bring.

"I think it is important, whether military or not military, to continue to support your employees," he says.

Phil Eatherton, a veteran and human resources manager for Waupaca Foundry, says supporting veterans and military personnel is second nature for the company. It's important to be able to translate military jargon, understand what vets have gone through and guide them to services as needed for issues such as post-traumatic stress disorder, he says. 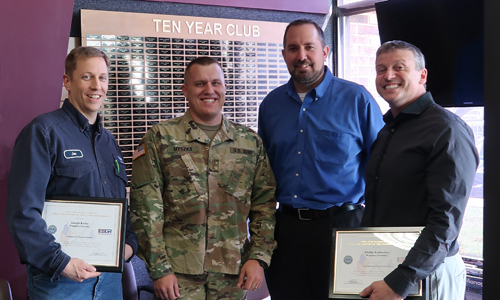 Kyle Myszka recognized Eatherton and supervisor Joe Kreske for their support while he served in the Army Reserve officer candidate school.

In 2017, Waupaca Foundry received its second of three Patriot Awards when metallurgist Kyle Myszka recognized Eatherton and supervisor Joe Kreske for their support of him while he served in the Army Reserve officer candidate school.

"It's important that they have a place to come home to and go to work and something that makes them feel healthy and happy and provide for their family," he says.