At its 15th annual awards banquet, Perry County Chamber of Commerce awarded Waupaca Foundry in Tell City, Indiana the 2016 Large Business of the Year. The gray iron and ductile iron foundry was recognized for its business practices and contributions to the community. The Chamber cited Waupaca Foundry's commitment to the community, including its financial and in-kind support to public and technical schools, as well as countless local charities, events and fundraisers benefiting the enrichment of Perry County residents and businesses alike. Recent, major initiatives include civic collaboration to establish the County's second helipad and Perry Childcare.

In the nomination form Mary Roberson, superintendent for Perry Central Community School said, "Waupaca Foundry has changed Perry County for the better in many ways over the past 20 years. As a community we are fortunate for their generosity, but equally important is Waupaca's attitude of common sense solutions and ways to solve local challenges. It is particularly fitting that Waupaca Foundry is honored during this, their 20th anniversary year. 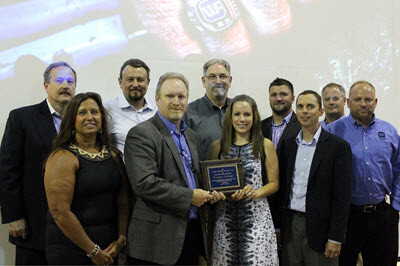 Waupaca Foundry is humbled to be named Large Business of the Year. Our goal is to be the industry leader in iron castings, but it's also our passion to give back to the communities in which we operate. Our achievements depend on collaboration between civic leaders, businesses and residents alike.

Waupaca Foundry, headquartered in Waupaca, Wis., has operated in Tell City, Indiana since 1997. To meet customer growth and demand, construction of the Tell City ductile and gray iron foundry began in the fall of 1995. Today, Waupaca Foundry employs 4,400 in the U.S. The Tell City foundry operation employs 960 full-time workers, more than twice than what was projected when operations began in 1996. Today, the average annual payroll exceeds $65 million in Perry County and surrounding communities.